The driving force in gaining professional fire fighter rights and benefits in Ohio.

CLICK WITHIN THE DIFFERENT DISTRICTS BELOW FOR MORE DETAILS 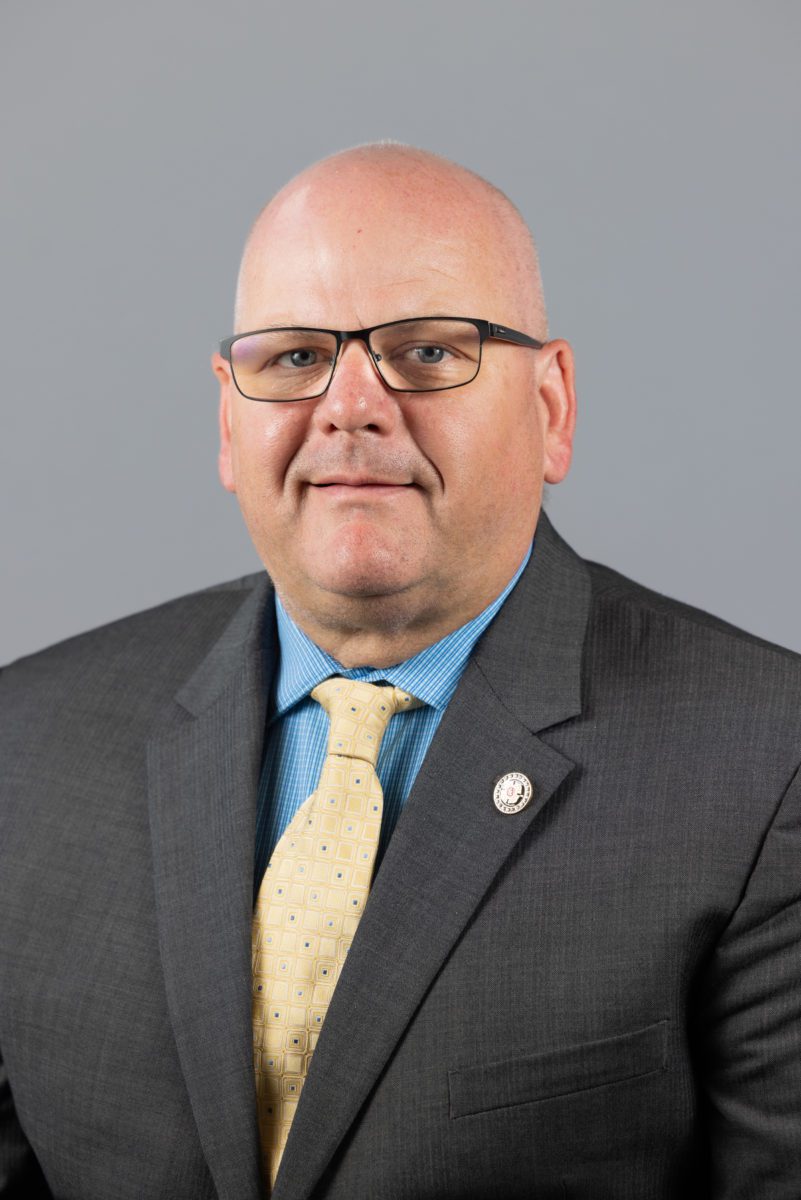 Jon Harvey was elected as president of the Ohio Association of Professional Fire Fighters at the OAPFF 53rd Convention in May 2022.

Jon joined the Middletown Fire Department (MFD) as a Fire Fighter / Paramedic in 1995. He currently serves as MFD Captain at Station 81, where he heads the city’s Hazardous Materials Response team and is the co-chair of the Butler Co. Reginal Haz Mat team.

Harvey got involved with union service early in his career. First serving as trustee, then vice president, and eventually being elected as President of IAFF Local Union 336 (the birthplace of the OAPFF). Because of the hard work he put in with his local union he was appointed to the OAPFF Legislative Committee where he served until being elected by his peers as the OAPFF’s 4th District Vice President for 12 years.

Harvey has an impressive fire fighter and union resume’ including an associate degree in Fire Science as well as being certified with the state of Ohio as a Fire Safety Inspector, Fire Instructor, Rescue Technician (water, ice, trench, and confined space) and Fire Officer I, II and III.

On the state union level Jon has been a featured speaker at multiple OAPFF seminars including the OAPFF Winter Educational Seminar, OAPFF Health and Safety Seminar and OAPFF Fire Ops 101.

In his role as OAPFF 4th District Vice President, Harvey was proud to be a member of the leadership teams that saw the successful repeal of Senate Bill 5 and the passage of SB 27, the “Michael Louis Palumbo, Jr.” Act (presumptive cancer legislation) in Ohio.

Jon was born and raised in Germantown, Ohio where he still lives with his wife Tina and two children Claire and Owen. While attending Miami University, in 1983 Bill joined the US Army as a Paratrooper in the 82nd Airborne Division. Honorably discharged in 1987, Sgt. Quinn worked in private industry until 1989 when he was hired by the City of Hamilton Fire Department (IAFF Local 20) where he rose to the rank of Paramedic Supervisor, retiring on St. Patrick’s Day in 2016.

Bill became introduced to the Union Movement in 1988 as a shop steward for the I.B.E.W. After a couple years on H.F.D., Bill became active in Local 20 serving in various capacities. Elected as union president in 1997, his involvement with the OAPFF began at that time serving on various committees including the then newly formed Legislative Committee.

In 2003 Bill was elected as OAPFF 4th District Vice President. In 2008 he was appointed to the Ohio EMS and Fire Board by Governor Ted Strickland. In 2010 following a restructuring of the OAPFF, Bill accepted the position of Director of Operations. In 2012 Bill was elected unanimously as OAPFF Vice President Emeritus and following the untimely death of Brother Mark Horton in February of 2017, Bill was appointed by the Executive Board as Secretary-Treasurer, being re-elected at the 2018 Convention by acclimation.

Bill has three children and lives in Trenton with his wife Faye and daughter. After serving two years in the US Army, Vice President Roy Hollenbacher began a career with the Lima Fire Department in 1971.

Early on in his career and surrounded by solid union leadership, Roy became actively involved and was elected to serve on the Executive Board of IAFF Local 334. Holding the position of Secretary/Treasurer throughout most of his career on the fire department. In 1990, he began at the OAPFF as the First District Work Comp & Pension Representative and was first elected OAPFF First District Vice President in 1999. Mike Norman joined the Cleveland Fire Department in 1997 and served as a union steward for many years before being elected Secretary of Local 93 in 2008. In 9 years as Secretary, Mike worked to enhance member communications and strengthen Local 93’s relationship with elected officials.

VP Norman was a strong proponent of Local 93 returning to the OAPFF. He is currently the Public Information Officer for Cleveland Fire Department. He attended the IAFF Political Training Academy. Mike also ran the Issue 119 Campaign that defeated a proposed change in the city charter allowing for appointed Deputy Chief Positions.

As a 1993 graduate of Ohio University’s EW Scripps school of journalism, he brings a strong communications and media background as well as experience in negotiations. Vice President Norman lives on Cleveland’s west side with his wife, Colette and two children. Cory began his proud firefighting career with the Air Force while being stationed in Charleston S.C. After he was done serving with the military, Cory returned home to follow in his father’s footsteps by becoming a professional fire fighter with Coshocton Fire in 2004. Cory worked his way up to the rank of captain in 2011.

Cory was elected Coshocton Local 216 Secretary Treasurer in 2005 and then later became union president in 2014. In 2016 at a special meeting he was elected to the 3rd District Vice President. Cory has two children, Caden and Cammy. After setting aside his engineering degree in 2000, Jeff Moore changed careers and started with the West Chester Fire Department, becoming a member of IAFF Local 3518.

He did not wait long to get involved. Jeff was elected to serve on the Executive Board of IAFF Local 3518 as Secretary-Treasurer in 2002 and then President in 2004, a position he has held for 18 years.

Jeff has a long history of advocating for health and safety initiatives, benefits and the rights of firefighters while being protective of collective bargaining and pensions.

He has served the OAPFF on various committees, including Legislative, Secondary Employment, and the Constitution and ByLaws. He is also a former trustee of the Ohio Police and Fire Pension Fund.

Jeff is a third-generation firefighter, with brothers serving as police officers. He resides in Fairfield, OH with his wife and have two children. Brian Gatley started his career at Jerome Township in 1999. From there he moved to Prairie Township before starting at Norwich Township in 2003. Brian was elected as president of Local 1723 in 2008. He has negotiated several collective bargaining agreements. He has attended numerous IAFF and OAPFF conferences and training sessions.

Gatley spent 11 years as a member of the OAPFF Legislative Committee prior to being elected to the position of DVP. He has been a strong advocate for PEER support, cancer presumption, PTSD coverage and collective bargaining rights. Mark Sanders is the IAFF 8th District Vice President which includes Ohio, Illinois, Indiana, Kentucky, and Michigan. Mark is the former OAPFF President serving from 2004-2016. He is also past Legislative Director of the OAPFF. Mark sits on the Technical Committee for NFPA 1710, which has set industry standards for career fire department staffing and deployment. Sanders began his career as a professional fire fighter in Marion in 1981. Tough times in Marion forced the city to lay off many fire fighters in 1983 including Mark. Looking to further his career as a professional fire fighter, Sanders became a member of the Cincinnati Fire Department in 1984. Mark comes from a long line of strong union advocates. His mother was local Secretary/Treasurer of her letter carriers union for 32 years and his father, Lefty, is a past OAPFF President. So it is no surprise that with the Cincinnati Fire Department Mark began his ascent to local leadership. From Trustee to Recording Secretary and VP, Sanders was elected Local 48 President in 1994.

Family, as well as union activism, is important to Mark. He spends much of his free time with his wife, Diane, two adult children and three grandchildren . Sanders is also the driver of a Father-Son NHRA drag racing team.

This section on health care will be used to highlight any changes that the OAPFF has made in reference to our Health Care Task Force. Please be patient as this is a very delicate topic that we do not take lightly. Please check back regularly as we will be making recommendations in the future. Stay strong, Stay United, Stay Informed.

Since 1918, members of the Ohio Association of Professional Fire Fighters have been on the frontlines protecting lives and property of citizens across the Buckeye State – just as the OAPFF has been there to protect the interests and health and safety of those first responders. Over the years, the profession of fire fighting has expanded to include EMS and rapid response to virtually every emergency, natural and man made. Accordingly, the OAPFF has increased its services to meet the growing needs of our members. We are members of the International Association of Fire Fighters(IAFF), the driving force behind nearly every advance in the fire and emergency services in the 21st century. With headquarters in Washington, DC, and Ottawa, Ontario, the IAFF represents more than 316,000 full-time professional fire fighters and paramedics in more than 3,400 affiliates. IAFF members protect more than 85 percent of the population in communities throughout the United States and Canada.